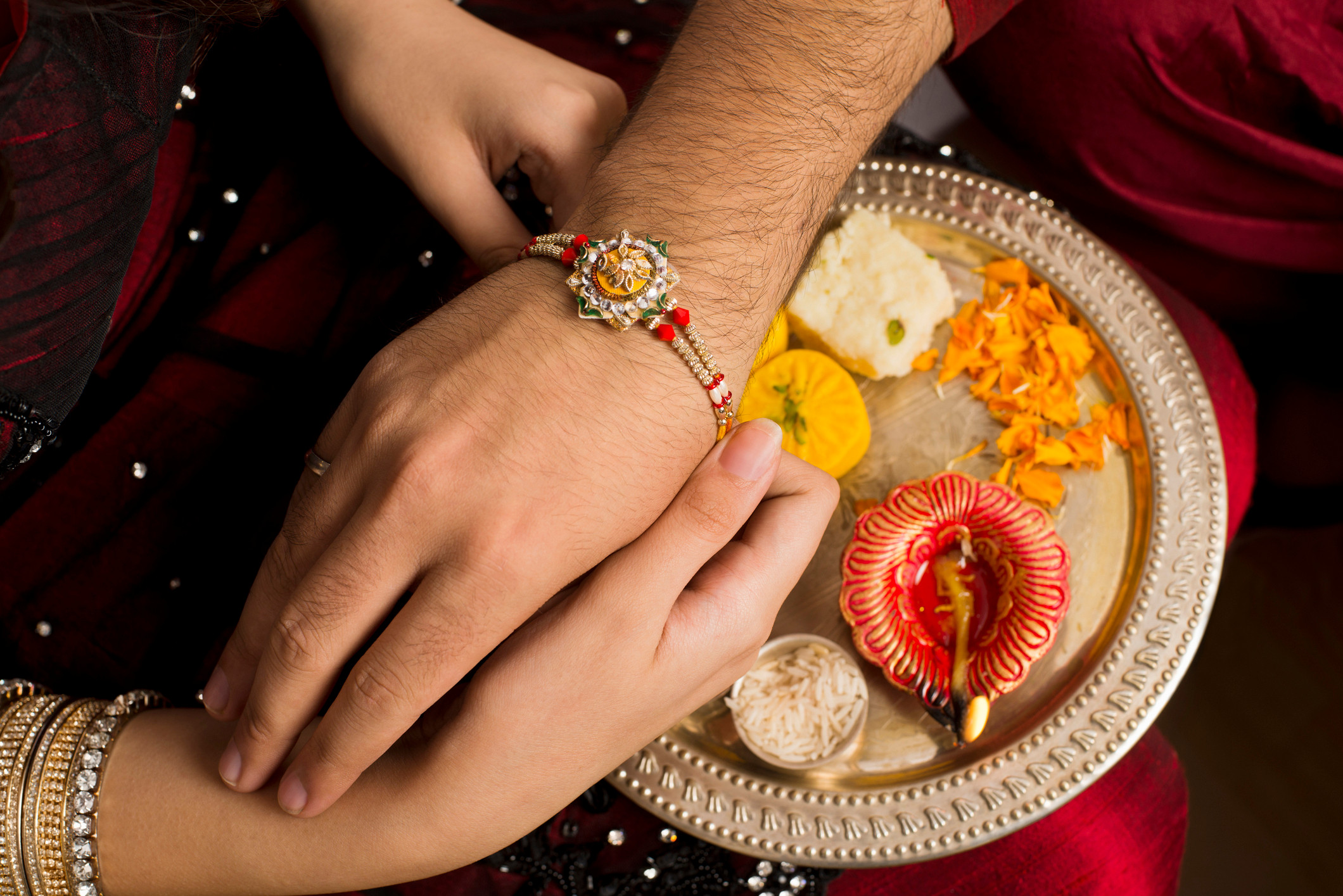 Raksha Bandhan is a day when brothers and sisters renew their affection for one another. Hindus in northern India commemorate it, as do Hindus and Buddhists in Nepal, where adherents of both religions frequently celebrate in one other’s temples. Sisters pray for long lives for their brothers by attaching colourful threads or amulets on their wrists and applying vermilion paste to their brothers’ foreheads.

In turn, brothers give their sisters gifts—usually jewellery or clothing, but also money—while promising to protect them throughout their lives. During the celebration, a friend or relative is requested to pose as a brother or sister in families where there are only boys or only females. In Nepal, Brahmins tie golden threads around everyone’s wrists while repeating a mantra or sacred word to endow the thread with the ability to protect those who wear it.

At this time, the Janai, or “holy strands,” that all Brahmins wear around their necks are also changed. The word Hindu comes from the Sanskrit word Sindhu (or Indus), which means river in Sanskrit. It referred to individuals who lived in the Indian subcontinent’s Indus valley. Hinduism is widely regarded as the world’s oldest living religion.

Hinduism has no creator, a one global reality (or god) known as Brahman, a large number of gods and goddesses (known as devtas), and multiple books. Hinduism also lacks the priesthood and hierarchical structure found in other religions, such as Christianity.

Hindus recognise the authority of many different books, but there is no single, universal canon. The Vedas are the oldest Hindu literature. The word “veda” is derived from the Sanskrit word “veda,” which means “knowledge.”

The Vedas are a collection of hymns, instructions, explanations, sacrifice chants, magical formulas, and philosophy that were compiled from old oral traditions. The Great Epics are another series of religious writings that depict Hindu faith in action. The Ramayana, Mahabharata, and Bhagavad Gita are among the Epics.

There are around 33 million gods in the Hindu pantheon. Some of these are regarded more highly than others. Hindus believe in a single supreme god or universal concept who reigns supreme over all other gods. Brahman is the name of a Hindu god. Despite his supremacy over all gods, he is not worshipped in popular rites since he is removed from the people’s daily lives. Brahman is a form of impersonality.

He is served by lesser gods and goddesses (devtas). They are revered as gods because they are more closely involved in people’s affairs. The most revered god in Hinduism differs according to Hindu sect. Although Hindu devotees follow their faith in diverse ways and worship different gods, they share a similar perspective on reality and reflect back on a shared heritage.  Buy rakhi online and make your bonds stronger.

The rakhi, which is usually constructed from a few coloured cotton or silk threads, but can also be made from silver and gold threads, signifies protection against evil in the following year. According to legend, when Sultan Babar, the Mohammedan Emperor in Delhi, received a part of a silken bracelet from a Rajput princess in peril, he went to her aid. Because such a bond was regarded as similar to that of a brother and sister, it became usual in India for men who had received rakhis to risk their lives, if necessary, to assist and rescue their “sisters.” Another tale claims that Sachi, the Hindu god Indra’s consort, placed a thread bracelet around her husband’s right wrist when he was shamed in battle by demon forces. Indra fought the demons once more and triumphed this time.

Click here Kalyan for the Pin code of all Indian cities.

Rakhi for Raksha Bandhan is celebrated by Hindu families by performing pooja, praying, and having a lot of fun. Sisters tie a colourful Rakhi (holy thread) on their brother’s right wrist and exchange presents, including delectable sweets.

People dress up for temple visits and put on new garments. On the Holy Rakhi day, the brothers usually wear traditional clothing such as Kurta-Jeans, Kurta-Pajama, Pathan Suits, and so on. The married sisters generally wear designer sarees with zari or zardozi work and jewellery, which can be heavy or light. Sisters who are not married love to wear salwar-kurtis, churidar-kurtas, parallels-short kurtas, and so on.

India is a place of festivals, and Indians gather with their families and neighbours to celebrate each one. Rakhi is a Hindu event that takes place every year in the Shravana month of the Hindu calendar, during the full moon. The Rakhi festival is a sibling celebration in which the sister ties a colourful rakhi around her brother’s right hand wrist, applies tilak to his forehead, performs pooja, and prays for his long life.

It is not essential to be related by blood to tie a rakhi; the sacred thread (rakhi) can be knotted to people who are not related by blood. Rakhi can be attached to those who are close to you to form a closer relationship, allowing you to feel comfortable in your social life. All sisters look forward to Raksha Bandhan, when they can tie a Rakhi on their brother’s wrist. The Raksha Bandhan event is a celebration of sister and brother love. Moreover, you can send rakhi to usa and make the festival well celebrated.